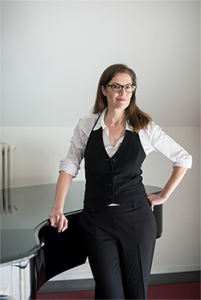 Graziella Contratto represents a new generation of conductors who focus on highly inspired and refreshing concepts in their programs from Renaissance to contemporary music. Surprising references in the choice of her repertory and an openhearted communication towards the audience reflect her important relationship with literature, architecture, dance and film.

In 1998 after her studies as a pianist, chamber musician, teacher for Music history and conductor, Graziella Contratto is invited by Claudio Abbado to become his musical assistant in the Berlin Philharmony and the Easter Festival in Salzburg. She assisted for Boris Godunow, Tristan und Isolde and Simone Boccanegra (Salzburg Easter Festival 1998/1999), Cosi fan tutte ( with the Mahler Chamber Orchestra, Ferrara 2000) as well as for different recordings and World tours with the Berlin Philharmonic orchestra conducted by C. Abbado.

In 2003 the Swiss conductor Graziella Contratto becomes the new Artistic Director of the Orchestre des Pays de Savoie in France and thus the first female chief conductor in France. During the following six years, the orchestra enlarges its audiences and the French media applause G. Contratto’s programmes.

She has conducted the Tonhalle Orchestra Zurich, the Deutsche Kammerorchester Berlin in the Berlin Philharmonic concert hall, the Deutsche Kammerakademie Neuss, the Basler Kammerorchester, the Berner Symphonie Orchester, Camerata Schweiz and performed in Gidon Kremer’s Festival “Les Muséiques” in 2005. Invitations to the Orchestre de Picardie, the Prague Chamber Orchestra and the Göttinger Sinfoniker followed.

As a musical consultant Graziella Contratto has cooperated with the film director Bettina Ehrhardt in her documentaries “Kielspur im Meer” about Luigi Nono,“We play”, a portrait of Bobby McFerrin’s friendship with Chick Corea and “wo ich noch nie war” (Helmut Lachenmann).

Between 2007 and 2013, Graziella Contratto was the artistic director of the Davos Festival – young artists in concert in Switzerland. Her original performing concepts (e.g. a conducting class for children, the Nomads‘ concerts), her choice of programs and the especially well received young composers’ workshop with resident composers Wolfgang Rihm, Deqing Wen, Frangis Ali-Zade, Andres Bosshard and Erkii Sven Tüür led to a remarkable frequentation and an enthousiastic reaction by the audience and the medias.

In 2008 Graziella Contratto created a comic-symphonic project with Ursus & Nadeschkin and the camerata Schweiz which lived to see four reprises in different Swiss tours. In July 09 she conducted Verdi’s “La Traviata” at the Opera Festival of Avenches, Switzerland and her performance was highly praised by the international press.

Sinde 2004, Graziella Contratto successfully runs conducting workshops for managers and executives both nationally and internationally. She regularly participates in radio and television programmes and in 2015, as successor to Heinz Holliger and András Schiff, she will direct an edition of the music festival Ittinger Pfingstkonzerte.

Since 2010, she is Head of the Department of Music at the Bern University of the Arts.

She has been awarded The Johanna Dürmüller Preis (2008), the Honor Medal oft he City of Chambéry (2009)  and the Cultural Award of Central Switzerland (2015).