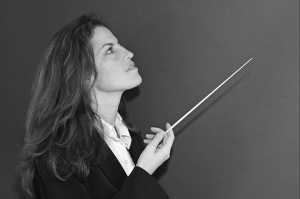 Since my very first steps into the world of music, chamber music has been my favourite repertoire, that is probably why my first years as a young conductor were deeply under the influence of this artistic mindset, too. I loved to accompany instrumentalists and singers on the piano and this passion coloured clearly all my musical actions, my feelings and reflections about Music. Consequently, Harmony seemed the prior impetus whenever it came to conducting, too. It was only later-on that I became aware of the fact that true leader-ship in front of an orchestra needs also clear ideas, gestures and a precise profile of musical handling if symphonic Harmony is the goal.

Every encounter with an ensemble, its tradition, style or general vision of playing the orchestral repertoire was life-enhancing to me. Be it for the individual  brillance e.g. of a solo-wind player or the collective charism of a string group, be it for the curiosity of an orchestra and its open-minded position – I was privileged to benefit from every experience.

I tend towards two main epochs in my repertoire as a conductor : late romantic composers and the classical Modernity, starting by Wagner. Furthermore, I had the pleasure to commission and create several compositions by contemporary composers in France, Germany and Switzerland.

To be totally honest, the Italian part of my heart still loves to accompany singers, especially in the opera repertoire : starting by Mozart via Verdi up to  Victor Ullmann, a Therezin composer killed in 1945 whose opera ‘Der Kaiser von Atlantis’ I had the honor to conduct in Lyon.